Here’s a useful think piece from Jonathan Powell arguing strongly that Western governments need both to understand and accept that sooner or later, dialogue with ISIS will become necessary. And that given that fact, they might as well start to outline a strategy for talking to Deash – not simply demonising and bombing them.

Powell’s argument here builds on the thesis of his new book Talking To Terrorists: How To End Armed Conflicts and beyond that, his own centre-stage involvement in the Blair government’s secret talks, and eventually open negotiations with, the IRA and other parties aimed at achieving a Northern Ireland peace deal – efforts that eventually bore fruit in the shape of the April 1998 Good Friday Agreement

There’s much to commend Powell’s argument in this respect, and one can only hope that policy makers in Washington, Paris, London and Moscow will give it the attention it fully deserves. Rather less convincing, however, is Powell’s contention that efforts to open up a dialogue channel with ISIS should run in parallel with the bombing campaign to which the UK has now also committed itself. Bomb and talk in other words? Its highly questionable military impact apart, the escalating Syria bombing campaign leads inexorably to two highly negative impacts: an escalation in the number of civilian casualties (after Afghanistan and Iraq, let’s just let’s hope they don’t get described as collateral damage this time round); and an effective propaganda – and as such recruitment – tool for ISIS in the region.

In any case, here’s the article:

David Cameron says we should fight Islamic State. Jeremy Corbyn says we should talk to them. They are both partly right – we need to fight and talk. Each is necessary but not sufficient. If it is really our intent to “degrade and destroy” Isis, then we need both a military and a political strategy.

Bombing is necessary. It can help stop Isis advancing, and it was crucial in allowing Kurdish fighters to retake Sinjar and hold on in Kobani. And it makes no sense whatever to bomb Isis on the Iraqi side of the border, but not the Syrian side. If the difference is supposed to be that we have the permission of the government in Iraq but not in Syria, that is a joke. I haven’t noticed Bashar al-Assad objecting to Russian and French bombing. And if the argument is that Isis will attack us here because we start bombing them in Syria, but not because we’ve already been bombing them in Iraq for a year, then that is absurd. 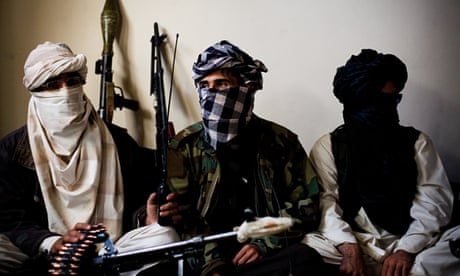 How to talk to terrorists – Read more from Jonathan Powell

However, as we know from our experience in Kosovo 16 years ago, bombing does not make an army withdraw. Only ground forces can. To have a coherent strategy to drive Isis out of territory it controls we need “boots on the ground”.

But whose? Kurdish forces in both Iraq and Syria have now advanced to the edge of their territory but will advance no further. Nor should they. They would not be welcome in Sunni Arab towns and villages either side of the border.

Nor are the Shia militias from Baghdad the right forces, particularly after the destruction that followed their taking of Tikrit. There are no significant Sunni Arab forces in Iraq prepared to fight Isis, and a repeat of the 2006 Anbar awakening – in which Sunni tribes joined forces to take on al-Qaida in Iraq – does not seem possible.

Nor will Sunni forces in Syria – whatever their real number – make Isis their top priority as long as Assad remains in power. And finally it is pie in the sky to suggest that forces from other Arab countries should come to the rescue, while they are fully engaged in Yemen. If the west is not prepared to send ground forces, then who will?

However, even if we had ground forces capable of driving Isis back into being a guerrilla force once again, we would not have killed the idea behind it. That requires a political strategy, and not just one for removing Assad. General Warren Phipps, a hardened former commander of the US 101st Airborne Division, recognises that negotiating is what is required: “That’s how wars end … we can’t kill our way out of this.”

If we just dismiss Isis as merely a mad death cult we are deceiving ourselves. Unfortunately they are highly rational and shrewd, even if horrifically brutal. They know that killing a western hostage on TV in a new and grotesque manner will grab our attention in a way that beheading 70 Kurds never would. They know that an attack on Paris, or blowing up a Russian airliner, will lead to the spiral of escalation they want. If we are going to end the violence we need to respond coolly and calmly to what they do, rather than in the hot flush of emotion.

First we need to consider why they have political support. It seems outlandish to us that a creed so absurd should enjoy significant popularity. But it is hard to explain otherwise how a force of some 1,000 men could take the city of Mosul with a population of 2 million.

The explanation is that for many Sunnis, after years of tyranny from Nouri al-Maliki’s sectarian government in Baghdad, Isis didn’t look so bad. Among the many mistakes we made in Iraq, one of the worst was leaving precipitately in 2011 without ensuring a serious dialogue and power-sharing between Sunnis and Shia. The result has been Sunni alienation, on which Isis can feed.

It is no coincidence that many of the deputies to the Isis leader, Abu Bakr al-Baghdadi, come from the ranks of former Saddam military officers and Ba’athist officials. There is a similar discontent among Sunnis in Syria, who have been subject to Alawite rule and the tyranny of the Assad family. Unless we start to address the grievances that underlie Sunni alienation we have no chance whatsoever of resolving the problem of Isis.

Even beyond that we have to consider the unthinkable: the probability that we will in the end have to talk to Isis. Every time we have met a terrorist group we have said we will never talk to them; but from the original IRA in 1919 to Eoka in Cyprus, the FMLN in El Salvador, the Gam in Indonesia, the Milf in the Philippines, the PLO in Palestine and the Farc in Colombia, we have ended up doing so. People say Isis is different and the rule doesn’t apply. Of course it is different, just as each of those groups was different from each other, but does that really mean that all the lessons we have learned from our previous encounters are no longer valid?

I am not suggesting for a moment that we should sit down with Baghdadi now and try to negotiate, even if he were prepared to sit down with us. But we should do what we did in all previous conflicts: open a quiet channel that will allow us to begin negotiations once both sides have come to the realisation that there is no military solution. The British government opened a secret channel to the IRA in 1972, but negotiations did not begin until 20 years later. At some stage it will become apparent that we can’t wipe out the idea of jihadism militarily even if we destroy Isis and al-Qaida. We then need to be ready to talk.

People suggest that there is nothing to talk to Isis about. But it is important to understand that talking to terrorists is not the same as agreeing with them. The British would never have discussed a united Ireland at the barrel of a gun against the wishes of the majority in Northern Ireland. But when we sat down with the IRA, its leaders wanted to talk about legitimate subjects like power-sharing and human rights. The same will be true of Isis. No one is going to talk to them about a universal caliphate, but we can talk about Sunni grievances and a way of ending violence.

I am not arguing that talking is an alternative to fighting. Unless there is military pressure the armed group will never be prepared to talk. But judging by history, fighting is unlikely to provide an answer by itself. If I were an MP I would vote for bombing in Syria as in Iraq. But I would also want to know who is really going to provide the boots on the ground to fight Isis; and be assured of a serious political strategy to address Sunni grievances in Iraq and Syria.

If we learn the lessons of the past and combine all these tools – military pressure, addressing grievances and offering a political way out – and do it soon rather than trying everything else first, we may be able to spare a great many lives in the Middle East and in Europe.