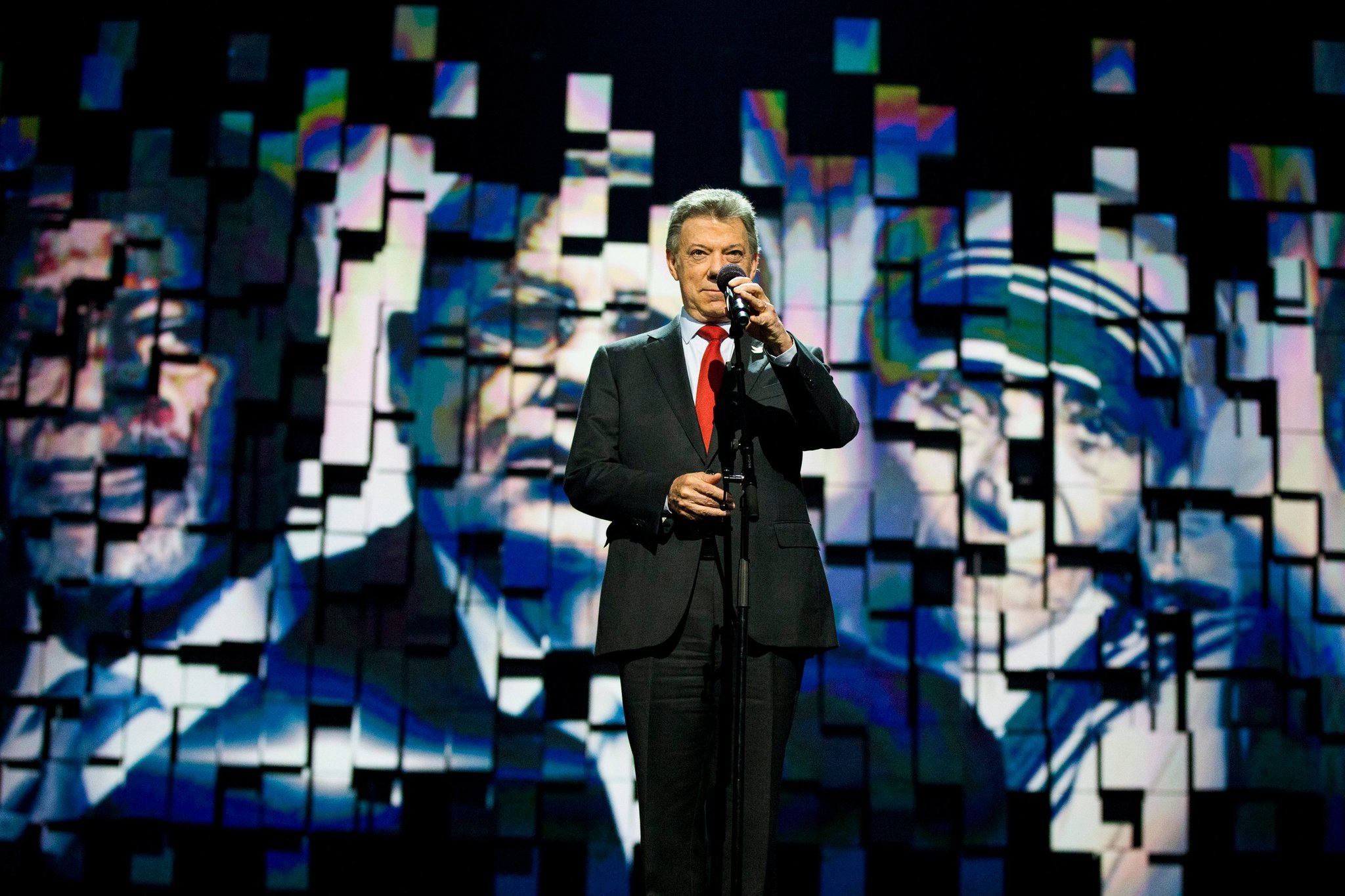 Here’s a strong appeal to the international community from the US special envoy to the country to help make Colombia’s final peace agreement work in practice. Not least because it’s possibly the most far-reaching such agreement ever to be reached in Latin America – and even, perhaps, beyond the continent.

OSLO — On Nov. 29, a 6-year-old Colombian girl, Yisely Isarama, was killed by a land mine in Choco Province. The same day, the Colombian Senate voted 75 to 0 to ratify peace accords to end the 52-year war between the government and the Revolutionary Armed Forces of Colombia, known as the FARC.

In microcosm, the two events encapsulate Colombia’s past and its potential future.

In his Nobel Peace Prize acceptance speech here on Saturday, the president of Colombia, Juan Manuel Santos, the architect of the peace settlement, called the war “a half-century nightmare.” It claimed 220,000 Colombian lives, most of them civilians’, and drove six million from their homes. In United States population terms, that would translate into 1.3 million dead and 36 million displaced Americans. Colombians year after year are killed or injured by land mines at rates higher than in any country except Afghanistan.

Under the agreement, FARC combatants will disarm and demobilize over 180 days under United Nations supervision. For most Colombians, it will be their first day living in a nation at peace. But the peace settlement, hammered out in Havana after four and a half years of negotiations, and revised following the loss of a plebiscite, aims to do far more than silence the guns, as welcome as the end of the conflict is.

The peace accord sets out to bridge the great historic divide between what President Santos calls “the two Colombias”: the Colombia of developed, modern urban centers and the Colombia of the vast, impoverished interior, where historically there has been little or no government presence and, as a result, little security, justice, rule of law or access to roads, health care and education. That is where the war was fought.

To close this gap, the government has committed itself to a far-reaching program of rural development for the largely peasant population that includes provision of land, titles, credit, roads, and crop substitution programs. To allow arable land to be cultivated safely, land mines must be removed.

The Kroc Institute for International Peace Studies at the University of Notre Dame, which is monitoring the enforcement of the agreement, reports that half of all negotiated peace settlements fail and the conflict resumes. Those that succeed address not just security, but also the social and economic roots of the war. The institute says Colombia’s agreement addresses root causes more comprehensively than any other negotiated settlement has.

That is no accident. More than in any previous conflict negotiation, Colombia put victims at the center of the process. Victims’ issues were not only on the table; victims themselves were at the table, regularly and often, asserting their rights and concerns. As a result, the agreement stipulates that the worst perpetrators of wartime atrocities — whether guerrillas, paramilitaries, or state actors — must confess their crimes, make reparations and accept sentences that include up to eight years of “restorative justice,” such as removing land mines, that are deemed acceptable to their victims and “effective restrictions on liberty.” Displaced persons must be compensated or returned to their homes and the remains of the disappeared, where possible, identified and returned to loved ones.

To fulfill these and other commitments, the government must create far-reaching programs and policies that will cost billions of dollars and take years to carry out. It must establish a system of transitional justice, a truth commission and investigative and protective units to safeguard the lives of demobilized former combatants and human rights activists.

Colombia will bear the largest burden, but the international community, led by the United States, must continue to help.

The United States has no closer strategic partner in Latin America than Colombia, and our interests in the region are intertwined. Colombian trainers and troops are working today with their American counterparts to help Mexico and Central America’s Northern Triangle countries — El Salvador, Guatemala and Honduras — combat the drug cartel violence that is fueling refugee flows, largely of unaccompanied minors. If, in turn, Colombia with American assistance can reverse its recent upturn in coca leaf production, it will take pressure off the Northern Triangle’s embattled governments and institutions.

Two decades ago, Colombia was nearly overrun by guerrilla armies, paramilitaries and drug cartels. Colombians, at great sacrifice, fought back, strengthened their democratic institutions, and created today’s opportunity for peace. Colombian leaders and citizens deserve the greatest share of the credit. But steady, sustained bipartisan American support and assistance for 16 years under Plan Colombia made a crucial difference.

If the peace agreement succeeds, Colombia will emerge as the strongest democracy in Latin America, a political and economic model for the region. As in the past, the United States should help Colombia reach that goal with continuing bipartisan support. Passage of President Obama’s request for $450 million in fiscal 2017 for an economic assistance program called Paz (Peace) Colombia would send the hemisphere, where support for Colombia’s peace process is universal, an encouraging signal about American staying power.

In September, at the United Nations General Assembly, Secretary of State John Kerry and his Norwegian counterpart, Borge Brende, secured commitments of $106 million from a coalition of 25 countries to help Colombia clear its land mines by 2021. President Santos showed the group a pamphlet that teaches Colombian children how to avoid land mines on the way to school.

Mr. Santos said he dreamed of the day when such pamphlets would teach Colombian students only science, art, mathematics or poetry, because Colombia would be land-mine free. Helping turn that dream into a reality would be a fitting memorial to Yisely Isarama.

Bernard Aronson, the United States special envoy to the Colombian peace process, was assistant secretary of state for inter-American affairs from 1989 to 1993.