There’s some simplification, more than a few touches of stereotyping and hyperbole: it doesn’t offer any solutions; and it comes from a traditionally robustly conservative UK media soource. But in the main this article offers a well-articulated analysis of the serious challenges facing Sweden on the back of Europe’s continuing refugee crisis.

Choice quote: ‘Britain is a country that is unsure of immigration, but loves immigrants. In Sweden, sadly, it’s the other way around’.

How Sweden, the most open country in the world, was overwhelmed by migrants

Sweden used to pride itself on giving a warm welcome to outsiders. But as the refugee crisis grows, so too does its sense of injustice

When it opened 15 years ago, the Öresund Bridge was seen as a glistening symbol of the new Europe. Sweden and Denmark had been joined together by a motorway with no border controls, fusing together economies and even blurring national identities. Many Swedes in Malmö have come to relish the city’s growing reputation as a suburb of Copenhagen, just half an hour away by train. It seemed to embody many dreams about the future: a continent where national borders would come to mean nothing. That dream was shattered at noon today.

After months of fretting, police finally introduced border controls on the Swedish side of the bridge: the latest symbol of Europe’s unravelling free movement project. There are many others: the razor wire separating Slovenia from Croatia; the border patrols on trains between Germany and Austria.

This has been painful for everyone, but devastating for Sweden because its main political parties barely know how to respond. Openness is the closest thing the Swedes have to a national religion, this policy is visibly failing – and there is no back-up plan.

When David Cameron set up the Northern Future Forum five years ago, it seemed like application for honorary British membership of Scandinavia. Then, it seemed to make sense. This was the land of snow, sea and supply-side economics – where tax cuts had steered the country out of recession long before any other European country. Sweden seemed to be lodestar to the world: George W Bush had copied its pensions policy, Tony Blair borrowed its hospitals policy, the Tories aped the free schools. The most socialistic country in the free word – yet still so entrepreneurial that it could sell cider to the English.

“Adjust for population size, and it’s like Britain finding space for a refugee population the size of Birmingham each year”

The headlines now suggest a country that is coming apart. Just last month, an asylum centre in the picturesque town of Munkedal was set alight, the latest in a series of arson attacks against refugees. Anti-Semitic incidents in Malmö have raised such concern that Swedes have now started “kippa walks”, gathering in their hundreds to accompany Jews home from the synagogue in a show of solidarity. The Sweden Democrats, a party routinely denounced by Swedish media as “neo-fascist”, is now leading in the national opinion polls. Economically, Sweden remains strong. But politically, it’s in crisis.

The problem stems from its famous openness. Swedes have long seen their country as a humanitarian superpower – one that may avoid military conflict, but stands in the front line of helping the world’s dispossessed. In the late Sixties, it welcomed Eastern Europeans who fled the Soviets, my wife’s parents among them. They were given everything by this wonderful country – food, accommodation, lessons in Swedish and even help to make sure their Stockholm-born daughters could still speak Czech. My family is one of many with reason to be grateful for Sweden’s habit of treating its openness as an article of faith.

But this became the problem. When the migration situation changed, Swedish policy did not. The numbers now arriving were never envisaged: this year alone, almost 200,000 are expected to arrive in this sparsely populated country. Adjust for population size, and it’s like Britain finding space for a refugee population the size of Birmingham each year. Sweden’s immigration agency has already run out of beds, and has been accommodating asylum-seekers at its head office. 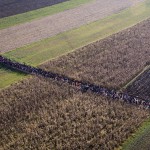 The problem of professional Romanian and Bulgarian beggars is, for visitors, the most striking. They sit outside Stockholm’s underground stations and coffee shops, often piling their belongings in plastic bags on the street. This seems to advertise that the authorities have lost control. A violinist friend of mine who lives in one of Stockholm’s main shopping streets complains that, if she’d start busking, she’d be removed by police very quickly. But the beggars literally camped outside her front door are undisturbed. It doesn’t take a xenophobe to feel a sense of injustice – and yet, right now, the only party articulating the injustice is the Sweden Democrats.

A man ascends on an escalator as signs put up by the Sweden Democrats political party are seen at Ostermalmstorg subway station in Stockholm  Photo: REUTERS

If the finest political minds in Sweden had set out to incubate a far-Right backlash in the world’s most tolerant country, they could not have done better than what has happened over the last few years. First, run an open-door immigration policy making your country the top destination in the middle of a global migration crisis. Next denounce as “neo-fascist” anyone who raises objections. All of this has handed entire sections of the electorate on a plate to the Sweden Democrats. Its leader, Jimmie Åkesson, was on sick leave for five months – he need not have returned. His rivals have been doing all his work for him.

“Britain is a country that is unsure of immigration, but loves immigrants. In Sweden, sadly, it’s the other way around”

During the summer, I spent a few days at the Swedish political festival in Almedalen, in the island of Gotland. It was, itself, an advert for openness: an open-air party conference with no security checks. The Prime Minister wanders around, addressing anyone who pulls up a chair. At the time, David Cameron’s election victory was being much discussed. The Swedes were taken aback, some even appalled, at the language used: stopping migrants from claiming benefits for four years? Pulling out of the European Union? How can a globally minded nation like Britain have such dirty-sounding politics?

The explanation is simple: Britain is a country that is unsure about immigration, but loves immigrants. In Sweden, sadly, it’s the other way around. Britons fret about border controls, but we don’t hesitate to hire immigrants when they arrive. In Sweden, immigrants are twice as likely to be unemployed as natives, one of the worst ratios in the developed world. Accepting immigration at such a level, while being unable to integrate it, is the recipe not just for a political crisis but a national identity crisis.

A few weeks ago, a nursery near my wife’s family’s home announced that it would do its bit, by accommodating some asylum-seekers. The next night, it was set ablaze. Such stories would have seemed unthinkable only a few years ago. A surfeit of compassion is not the worst vice for a country to have – yet this has, now, ended up roiling far darker forces which it is struggling to contain. Sweden has spent almost 20 years being admired and imitated for reasons that are still valid. But in misjudging the immigration crisis, it now stands as a tragic example of what not to do.