Here is my brother Tom’s alternately lyrical and learned tribute to the great Congolese singer Papa Wemba, who died after collapsing on stage in Abidjan earlier this week. Among Wemba’s many achievements, Tom Salter argues, was his embodiment of what is described as ‘a very Congolese cultural trajectory – the creation of ways of being modern that were not Western’. 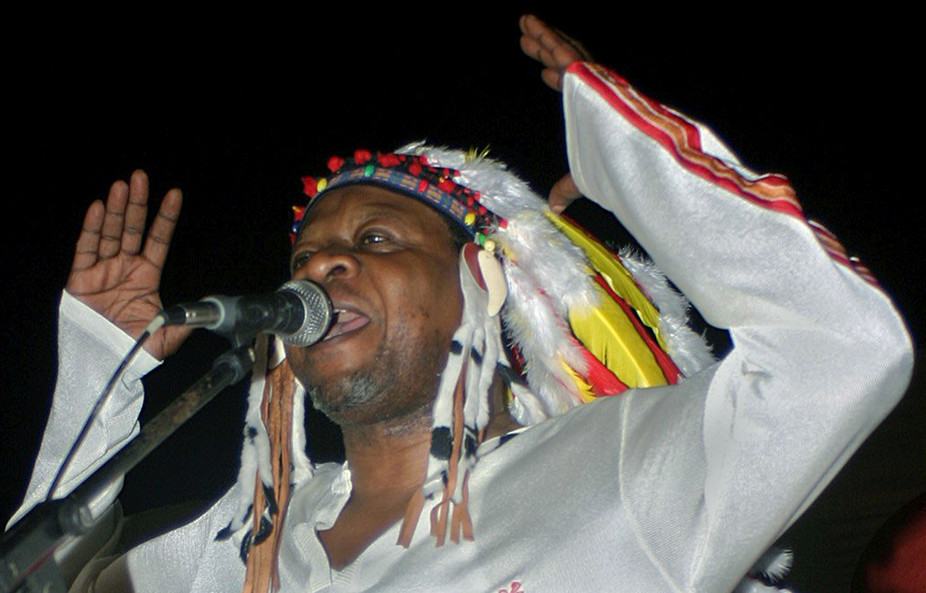 Photo credit above: Congo’s most famous musician Papa Wemba, performing at a concert in Kinshasa in 2004. Reuters/ David Lewis

Papa Wemba: musical king of the Society of Ambianceurs and Elegant People

Sadly, we have lost another great of Congolese music – Papa Wemba.

I never met Papa Wemba, but I did meet many of his colleagues and contemporaries. When I did my research on the spread of Congolese music in Africa between 1945 and 2000 I found the Congolese, whether from one side of the river or the other, were people who really knew their music and its history. It never ceased to amaze me how anyone I talked to could narrate a shared musical narrative, a kind of creation story, a history in which four generations of Congolese musicians marched through the years after 1945 spreading Congolese music all over Africa in a way no other African country could rival.

This was a continental achievement that stood in marked contrast to the degradation of domestic political life, the gradual collapse of the national economy and the crushing of hopes fired by the country’s first Prime Minister,Patrice Lumumba, after independence.

It was not South Africa and Nigeria – the African countries with the largest economies, populations and music industries – that spread their music in Africa between 1945 and 2000. Instead it was the country with the beating heart, le grand tam tam d’Afrique, Zaire (now the Democratic Republic of Congo).

Star of the rebellious generation

Papa Wemba was a star primarily of the third generation, the rebellious generation that came to maturity in the late 1960s and began touring Africa and Zaire in the 1970s. This generation was inspired as much by the stagecraft and showmanship of American soul superstar James Brown as by the indigenous musical sources to which their apparently omnipotent President Mobutu Sese Seko asked they turn when he instituted his Zairianisation and authenticity policies in the 1970s.

These policies were influenced by similar ones instituted earlier by Sekou Touréin Guinea. But they were not isolationist.

They were launched at the same time that Mobutu funded an international black diaspora musical jamboree. James Brown was invited to perform in Zaire in 1974 as part of the amazing musical extravaganza put on for the world title boxing fight between Muhammad Ali and George Foreman known as the Rumble in Jungle.

The Congolese stars of the second generation, Tabu Ley and Franco, performed in the stadium in Kinshasa alongside long-time favourites in Zaire – Latin starsCelia Cruz and Johnny Pacheco. They were joined by American stars Bill Withers,BB King and Sister Sledge, who were less well known in Zaire. The show is gloriously captured in the 2008 documentary “Soul Power”.

That galaxy of stars performed to the budding young musicians like Papa Wemba who were challenging the dominance of the second generation, which had grown fat on the patronage dispensed by their president in return for loyalty and praise.

In his life Papa Wemba composed one or two songs in his native Tetela. Like most Congolese singers, he used a rare thing in Africa – the single unifying national Congolese language of song, Lingala, for most of his compositions.

Papa Wemba had a very distinctive voice that, in 1969, carried him into the formative band of the third generation – Zaiko Langa Langa.

The Italian tenor Tino Rossi is credited as having had a big influence in the dominance of a certain kind of tenor in Congolese popular music. But Papa Wemba’s voice stands out. In 1979 he formed his own band, Viva la Musica.

In the mid-1980s and into the 1990s Papa Wemba became a star of the newly forming “world music” scene in Europe, particularly after signing with Peter Gabriel’s Real World label in 1990. This took him out of Africa, into musical explorations that were aimed at European, Japanese and US audiences and away from the dominant dance forms of the third generation beloved by the Congolese.

This was a smoother, urbane style that suited the “world music” audiences. Papa Wemba realised that the best way to straddle the very different Western and African markets was to write different music and maintain different bands in Paris and Kinshasa. The band he established in Paris was called Nouvelle Generation.

In this respect Papa Wemba reflected a very Congolese cultural trajectory – the creation of ways of being modern that were not Western. This was a musical cultural trajectory that freed the Congolese from the trap presented by a dichotomy between an African-defined indigeneity and a Western-defined modernity.

Papa Wemba helped forge a way of being Congolese and modern that did not mean being Western. But he was smart enough to adapt to Western tastes to access those lucrative Western markets, even if he also got imprisoned in Belgium in 2002 after years of making money smuggling people into Europe as part of his huge musical entourage.

It’s interesting that it was Japanese designer clothing in particular, by the likes ofIssey Miyake and Yohji Yamamoto, that formed a central part of Papa Wemba’s wardrobe when he was the uncrowned prince of the “sapeurs” (Society of Ambianceurs and Elegant People) in the 1980s. This was the elite Congolese society who knew how to create an ambiance. 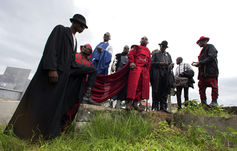 ‘Sapeurs’ – members of the flamboyant ‘La Sape’ movement – pose for a photograph in Kinshasa. Reuters/Rey Byhre

But Papa Wemba, like so many of his compatriots, also travelled all over Africa. He is one of the only Congolese musicians to have got any sort of purchase in South Africa. South Africa has struggled with the xenophobiclegacies of apartheid but a famous South African who resisted this was the pop queen Brenda Fassie. She recorded a collaboration, Ngiyakuthanda, with Papa Wemba in 1999.

Papa Wemba came to downplay the importance of clothes as the years passed – but as images from his life on and off stage show, he was somebody who could dress as well as he sang.

He leaves behind a body of work that rivals the greats of Congolese music history, with at least 42 records on which he has songs or on which he is the main composer.

Papa Wemba died after collapsing on stage in Abidjan, Côte d’Ivoire on April 23 2016.