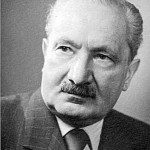 A thought prompted by a recent tweet I enountered. Imagine if the English-language title of Heidegger’s masterpiece really HAD been ‘Being On Time’.

Would that mean that those of use who generally aren’t would have read said work by now . . . . ?