The excellent openDemocracy are running the op ed piece Erik Solheim and I published jointly last week in the Hindustan Times. The article outlines a suggested priority action agenda for the new Sri Lankan government in the aftermath of the 17 August parliamentary elections that resulted in a resounding second defeat this year for former incumbent Mahinda Rajapaksa (the first being in the 8 January presidential elections). 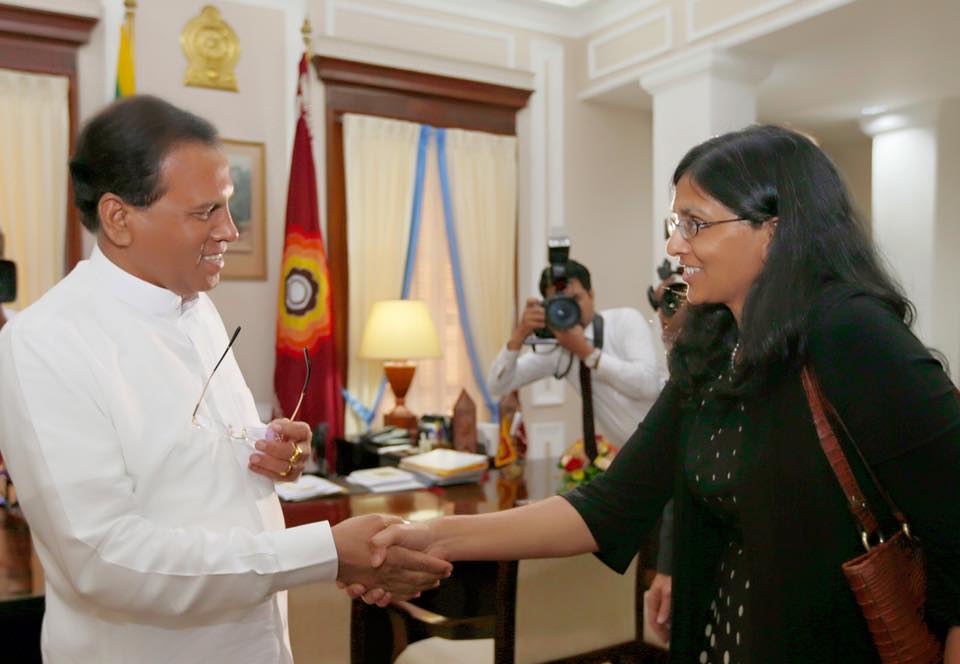 There have been a few important developments since the piece was originally published 10 days ago – notably with regard to the upcoming 14 September – 2 October UN Human Rights Council session in Geneva. In particular indications of a shift in US policy – or at the very least emphasis – with respect to its oft-voiced earlier demand for an international investigation into allegations of war crimes committed by government forces and Tamil Tiger guerillas during the final stages of the country’s 26-year long civil war.

Simply stated, during a visit to Sri Lanka last week by US Assistant Secretaries of State Nisha Biswal and Tom Malinowski, the former announced that the US will now support the Sri Lankan government’s position of favouring the establishment of a ‘credible’ domestic accountability mechanism, and will be tabling what Biswal termed a ‘collaborative’ resolution with the Colombo authorities on accountability issues and how to address them during the course of the upcoming UNHRC session. A resolution she said, moreover, that takes into account the ‘changes in the landscape’ that had taken place in the country in the past year, and what she described as the ‘substantial progress’ towards reconciliation made in the past few months.

This apparent US turnaround continues to divide Sri Lankans, human righta organizations and international observers alike. A number of political commentators – notably, but not exclusively Sinhalese ones – are emphasizing the geo-strategic context of the new US realignment. With Rajapaksa out of power, so the argument goes, the US now has an opportunity to help prise Sri Lanka aware from its erstwhile political – and no less importantly, economic – dalliance with China and bring it back into the Western fold: and by extension, its strong traditional linkages to ‘Big Brother’ (aka India) across the Palk Strait.

On the same basic lines, others point to what in the aftermath of this year’s ‘regime change’ in Sri Lanka and the installment of a government seen as genuinely committed to reform, could be described as a US policy of ‘constructive engagement’ with Colombo – on human rights, democracy and accountability issues no less than trade, economic reform and investment. Hence, for example, the ‘collaborative’ resolution proposal for the Geneva UN Human Rights Council session: a resolution framed together will be tougher, and have far greater national ownership and thus prospect of actually being implemented, so the argument might go, than the internationally-sponsored critique of Colombo that has been the standard fare of UNHRC sessions over the past decade.

But it’s far from plain sailing for the US. Biswal’s announcement met with instant, and fierce, criticism from a number of quarters. Prviately, and in some cases publicly,  international human rights organizations have expressed incomprehension over what they view as an apparent US sellout on an issue – pushing for an international accountability investigation – where Washington had previously led very much from the front. And this before even getting into critical practical issues such as how to ensure witness protection in a domestic mechanism (this being more important than many might think: there’s plenty of evidence, for example, to suggest that Sri Lankan military continues to enjoy a near free reign when it comes to arresting, interrogating and torturing Tamils it says it suspects of terrorist i.e. LTTE links).

Domestically speaking, Tamils have not exactly been expressing enthusiasm for the move. After initially voicing its ‘disappointment’ over Biswal’s announcement, for example, the Tamil National Alliance (TNA), with 16 MPs now the largest Tamil party in parliament, later stated that it could accept a domestic mechanism provided there was some form of international participation. In particular, involvement of international experts was described as a ‘must’. Encouragingly, from this perspective, the main elements of the TNA’s stand  were echoed in comments US Secretary of State Malinowski made at a press conference following a visit to Trincomalee, an ethnically mixed town on the country’s Eastern coast the day after Biswal’s announcement.

Underscoring the fact the US was commited to ensuring that a ‘real process’ of ‘accountability and reconciliation’ was enacted in Sri Lanka, Malinowski emphasized that while the US Administration remains ‘hopeful’ over the government’s ‘promises’, in the end the Wickremesinghe administration would be judged ‘not by its promises but by its actions and achievements’.

And on the thorny issue of a ‘domestic’ vs. an international accountability mechanism, Malinowksi had this to say:

“The important thing is that there be a judicial process that is credible to the people of Sri Lanka and to the international community.  For that process to be credible, I don’t think it has to be a completely international process, but it does have to be independent of political leadership.  It has to be led by people who are trusted by the minority communities and it should have some degree of international involvement, even if it is a domestic process organized under the laws of Sri Lanka.”

All of which – assuming the Secretary of State’s view echo those of the US Administration as a whole – suggests the shift in US position over Sri Lanka may be less dramatic than initially supposed.

All in all, it is perhaps unsurprising that the issue of how to address wartime accountability continues to divide the Sri Lankan polity. As we know from other conflicts around the world, the issue of how best to ‘deal with the past’ in the aftermath of years – or as in Sri Lanka’s case, decades – of sustained violence is usually one of the most challenging – if not the most challenging – dimension of the post-conflict agenda. In Sri Lanka’s newly reconstituted democratic landscape, it is thus to be expected that the transitional justice agenda – its contents, emphasis, timing and so on – is becoming the subject of heightened political contestation.