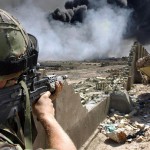 So this, my friends, is the closest Tony Blair has yet come to some form of apology for his decision to support . and participate – in the UK Iraq intervention. A truly amazing feature of this ‘apology’ is the fact that he focuses  on what he calls wrong’ intelligence over Saddam’s nuclear capability – in other words precisely the thing over which his government exercised most control: the production and dissemination of ‘intelligence’ justifying the UK decision to go to war.

Now it’s my turn to ‘apologise’ to you too Tony. For calling this claim what is: low, deceitful stuff.