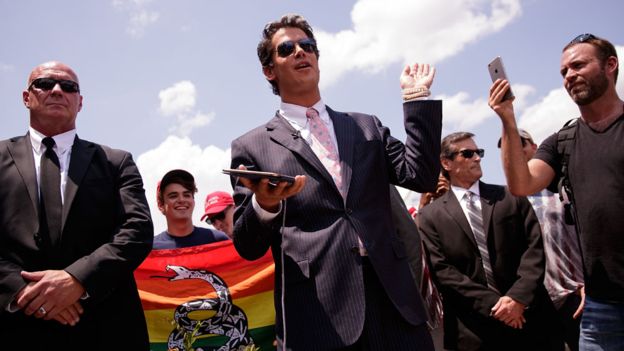 It is truly chilling.

Video of an alt-right conference in Washington, D.C., where Trump’s victory was met with cheers and Nazi salutes.

That’s how Richard B. Spencer saluted more than 200 attendees on Saturday, gathered at the Ronald Reagan Building in Washington, D.C., for the annual conference of the National Policy Institute, which describes itself as “an independent organization dedicated to the heritage, identity, and future of people of European descent in the United States, and around the world.”

Spencer has popularized the term “alt-right” to describe the movement he leads. Spencer has said his dream is “a new society, an ethno-state that would be a gathering point for all Europeans,” and has called for “peaceful ethnic cleansing.”

For most of the day, a parade of speakers discussed their ideology in relatively anodyne terms, putting a presentable face on their agenda. But after dinner, when most journalists had already departed, Spencer rose and delivered a speech to his followers dripping with anti-Semitism, and leaving no doubt as to what he actually seeks. He referred to the mainstream media as “Lügenpresse,” a term he said he was borrowing from “the original German”; the Nazis used the word to attack their critics in the press.

“America was until this past generation a white country designed for ourselves and our posterity,” Spencer said. “It is our creation, it is our inheritance, and it belongs to us.”

Here is the video, excerpted from an Atlantic documentary profile of Spencer that will premiere in December 2016.